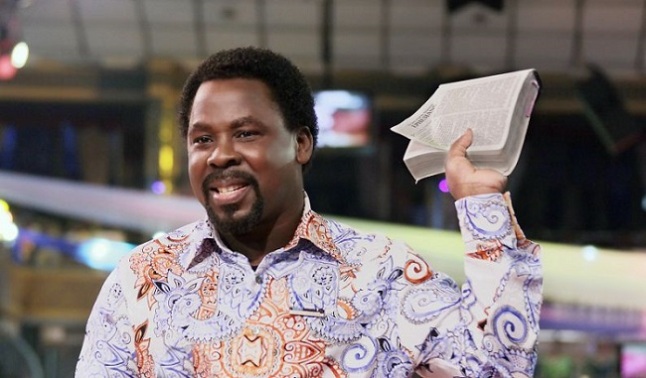 Prophet TB Joshua reportedly recently delivered a gay Nigerian, Thaddeus, and made him ‘straight’. (This was the point of this report where I rolled my eyes, but stay with me, guys. Let’s finish reading first)

Sharing his testimonies during a live programme on Emmanuel TV, Thaddeus, a Nigerian from Imo State (he had to come from my state of origin, I’m ashamed for us true sons of Imo State) revealed that the ‘gay’ demon has been chased out of him after an encounter with Prophet TB Joshua.

“I was travelling to Asia and had a long stopover in an African country where he stayed in a hotel with a swimming pool. I went for a swim with fellow men, then went to eat and sleep. That night, in a dream, I saw myself swimming in the same swimming pool naked with other men. When I woke up, I was sweating and the ‘gay’ demon entered me,” he revealed. (Just like that folks. He slept, he woke, and he was gay)

“I realised that I no longer had passion for women, but rather began to develop passion for men like me, yet I was a Christian,” he further revealed. As a translator in his church, Thaddeus continued assisting in the church while still living that lifestyle and “indulging in these sinful desires”.

One day, his pastor asked him to go to The Synagogue Church of All Nations, SCOAN for deliverance. “On arriving at The SCOAN, I was in one of the many overflow canopies and could not get a pass to enter the church. From nowhere, an old woman who I have never met before handed me a pass, saying, ‘Here, take mine and go inside.’ As soon as I entered, Wise Man Christopher approached me, and I lost control of myself until I was finally delivered in the name of Jesus Christ,” Thaddeus narrated.

“Now I am delivered, I no longer have affection for men but for ladies. If you come across someone with the same problem, you should not condemn. The only answer is deliverance,” he concluded.

Now, of course I know this report is a farce, a calculated attempt at yet again besmirching further homosexuality in Nigeria. There was no deliverance and no actual gay Thaddeus needing the touch of the pastor. Even if this Thaddeus exists, and ‘was’ gay, I laugh in pity for him, if he thinks this is the beginning of his ‘straight-ness’.

And the fact that TB Joshua (who I believe is a fraud anyway; sorry, King and Gad, that is my frank sentiment) would let his ministry be used for such ignorance and prevarication just took away any respect I might have had for the man, not like there was much there to begin with. Nonsense and in between!

63 thoughts on “FYI: Swimming with men is a sure way to get possessed by ‘gay demons’”