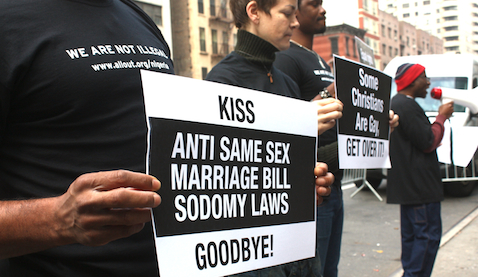 This is according to Linda Ikeji. Can anyone tell me if this is fact? If it is, I’d like to express my admiration for this move.

Remember when I once updated on KD about the Nigerian gay activist, Michael Ighodaro, who who challenged President Jonathan during the US-Africa Leaders Summit about the Anti-Same-Sex Marriage Act. (Read HERE). Among other things he said, the president was reported to have remarked: ‘If you think the law is unconstitutional you have the right to go to court and fight [to strike] it down…’

Well, it looks like someone is fighting to strike the law down. Apparently, Nigerian LBGT filed a suit against the Federal Government stating that the anti-gay law is unconstitutional. Find the press release below. END_OF_DOCUMENT_TOKEN_TO_BE_REPLACED