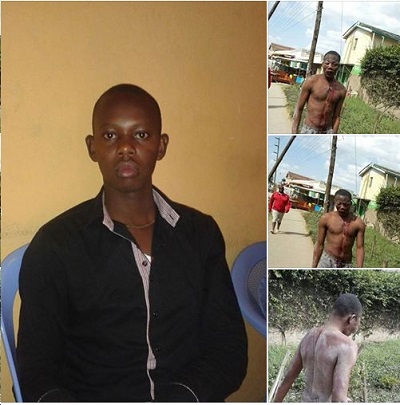 The Kenya gay community should be allowed to punish and deal with blackmailers, with whatever means necessary, it seems.

News that several alleged gay blackmailers have been killed or beaten by mobs was largely welcome by the gay community especially after suffering for years from a select group of gay men who extorted and stole money, and property from their victims.

The initial case was one where a notorious blackmailer was beaten and stoned to death by a mob that was answering to an alarm raised by one of the victim. Just this month, two other blackmailers were shot dead by police in what was allegedly a case of blackmail gone wrong after their victim alerted the police.

And last week, the last known hard-core criminal and blackmailer, Joseph Makau (pictures above), was beaten to near death by a mob in a failed blackmail attempt at Tassia estate in Nairobi. END_OF_DOCUMENT_TOKEN_TO_BE_REPLACED