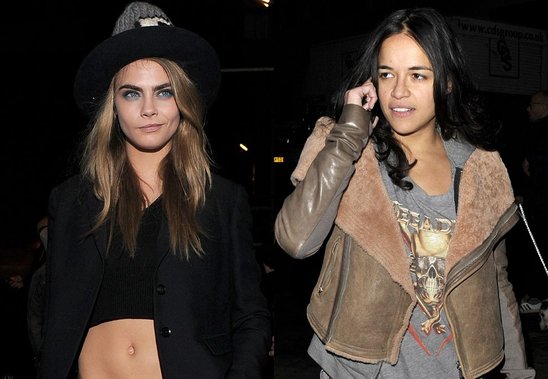 Cara Delevingne recently opened up about her sexuality to Vogue, and (rumored) former flame Michelle Rodriguez couldn’t be happier.

During the press launch for the Fast & Furious-Supercharged ride at Universal Studios, E! News asked the 36-year-old what she thought about the British model’s admission that she’s in love with singer Annie Clark (aka St. Vincent). Her response was awesome.

“Oh, that’s so sexy, you go girl! Work it out! I think that’s hot!” she told E! host Maria Menounos. The “Furious 7” star, who came out as bisexual back in 2013, also noted that it’s not easy to be open and honest about sexual orientation in a judgmental society.

“I think everybody should be open about everything in their lives, but at the end of the day the world isn’t that black and white,” she said. “You’ve got some people who, if they really did say what they do for a living, they’d lose their job. And that’s the real world. The real world is that with the truth comes judgment. And with judgment comes opinion and with opinion comes stupidity, ignorance and all these other things that can really mess up your life.”

Delevingne, 22, opens up about her relationship in Vogue’s July 2015 issue, although she doesn’t publicly define her sexual preferences. “I think that being in love with my girlfriend is a big part of why I’m feeling so happy with who I am these days,” she said in the interview. “And for those words to come out of my mouth is actually a miracle.”

Rodriguez continued with more praise for the blond beauty: “For her to come out, god bless, I think that’s beautiful.”

18 thoughts on “‘The real world is that with the truth comes judgment.’ – Michelle Rodriguez”