A federal judge has dismissed a woman’s lawsuit which she filed against all gay people, for Jesus’ sake.

The Christian woman from Nebraska last week filed a lawsuit against the entire group of “homosexuals” in America, in her role as Ambassador for the plaintiffs, namely, “God, and His, Son, Jesus Christ.”

Sylvia Driskell, 66, filed her seven-page handwritten lawsuit in the “United State District Court of Omaha,” asking the federal court to determine, “Is Homosexuality a sin, or not a sin.”

The lawsuit quotes Leviticus: “God tells his children in Leviticus Chapter 18 verse 22. Thou shalt not lie with mankind as with womankind. It is abomination.” The lawsuit also quoted Romans I and “Jenesis.” And it concludes with these time-honored questions:

‘Why are judges passing laws, so sinners can break religious and moral laws?

‘Will all the judges of this Nation judge God to be a (sic) lier?

‘For God has said; that all unrighteousness is sin, and that homosexuality is abomination.’

But it seems Driskell will not have her day in court.

Judge John Gerrard, according to the Omaha World-Herald, has dismissed her case, without even a hearing. “The United States Federal Courts were created to resolve actual cases and controversies arising under the Constitution and the laws of the United States,” Judge Gerrard wrote in his ruling. “A federal court is not a forum for debate or discourse on theological matters.”

Needless to say, the news of the lawsuit prompted hilarious responses on social media, like this from the Almighty God himself:

And then, from others. 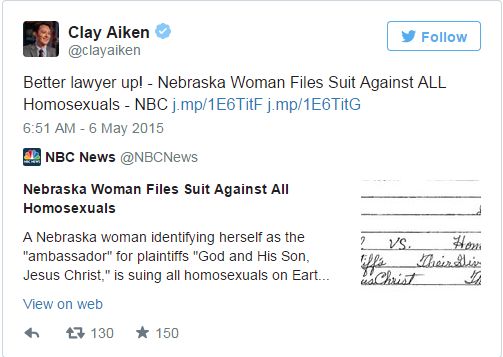 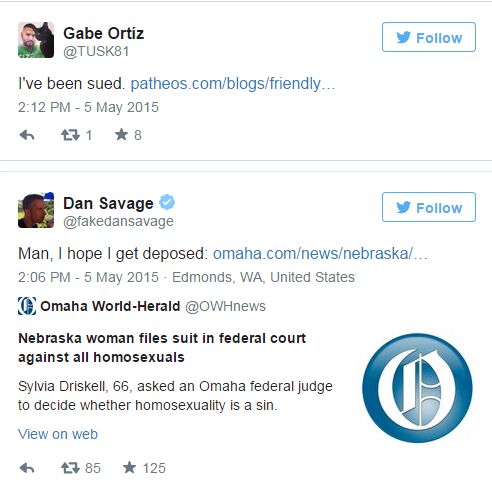 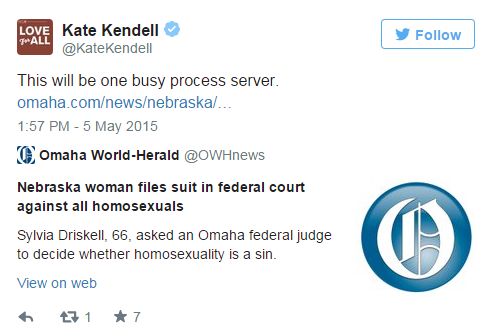