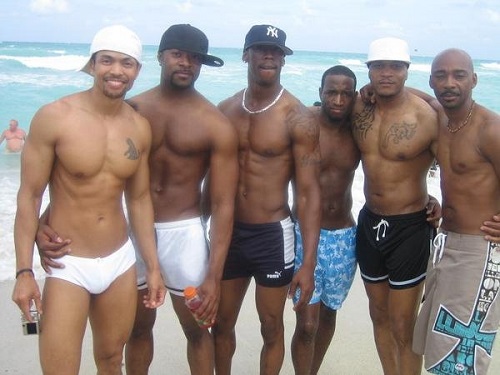 After centuries of religious oppression and decades of sexual shaming and second-class citizenship, gay men are finally achieving legal and social equality with the ability to confidently come out. But we still have a lot to work on when it comes to self-acceptance, especially within our own community and for our bodies. Here are ten things we often get hung up on:

We don’t have that six-pack, shiny smooth skin or the chiseled muscles guys in the underwear ads do. But then again, if you caught those same guys on a random Tuesday night, you’d discover that neither do they.

It takes a very precise exercise program, special short-term diet planning and intentional dehydration to look “model-hot” on the specific day and hour of a photo shoot — those models don’t look that way on most days of the year.

Plus, professional photographers are making big bucks for knowing how to take the most flattering photos, and then everything goes through Photoshop.

Wouldn’t you rather show a little life and grit in the way you look every day?

Looking back at that photo from high school and realizing your hairline has crept up more than an inch since then might’ve been be the first clear sign you ever had that your body really is aging.

But by the time you’re 30, a fully-shaved head is just a “hairstyle” for a quarter of the gay guys your age. Is losing hair really the end of the world?

Why is it that some guys are just gifted with a perfect bubble butt and others have a flat ass. no matter how much weight they lift and squat?

Here’s the thing: while some people really, really like round asses (and you’re probably one of them, if you’re concerned about your own), there are plenty of people out there who prefer a smaller butt, or don’t even check out guys’ asses at all. You won’t hear them mention it — who wastes time listing any of the countless things they’re indifferent to? But they’re there.

The point is, while you’re worrying about what you think you lack in the back, other people are seeing your other (ahem) assets.

If you hear someone complaining about freckles and pimples, more often than not it’s someone who has them.

But to everyone else, they’re just something interesting that sets you apart.

It seems that no matter how much of a gut we have, we wish we had just a little less (unless, of course, you’re someone who likes more).

Eventually we figure out that bellies are the most variable, and fickle, part of the body — they just come and go like the tide.

Like with freckles, the person who’s the most bothered by puffy nipples is the person who has them, preoccupied with what people think, wondering if they look feminine or whether there’s a way to make them go away. How do we know this? Lots and lots of stories, articles, forums and plastic surgery websites geared towards guys worried about how puffy their nipples look.

Most people don’t even realize puffy nipples on guys are a thing — maybe saw them once or twice before, maybe found it hot or maybe didn’t put any thought into it at all since a guy’s nipples can be all sorts of different sizes and colors and shapes. Yet removing small amounts of male breast tissue is one of the top five plastic surgeries on men.

Nobody is perfectly symmetrical — and you actually don’t want to be — because while symmetry is sometimes associated with beauty, perfect symmetry is not. You know yourself more than anyone else does, so see those little things — that snaggletooth or crooked nose or odd patch in your beard that won’t grow hair. Or that muscle on your right arm that’s 30 percent bigger than that same muscle on your left? Yeah, you know what that muscle is for.

Those “flaws” make for the best romantic pillow talk, when you spend an hour pointing out your subtle physical quirks to each other the night after your first date.

But regardless of what you’ve got, the biggest difference in confidence in penis size isn’t between guys with big dicks versus guys with small dicks — it’s between those who let other people see them naked versus those who are too afraid to.

We’ll be honest: there are size queens who want to be impressed by a big dick, and there’s no way to change whether you “measure up” in their eyes. But when it comes to being able to attract guys and make an amazing impression, it really isn’t size that counts. It’s about discovering and owning your particular sexual strength — whether it’s a big dick, your looks, your sensual massages, your wit or your amazing tongue.

There’s a joke that a gay man’s 30th birthday is “gay death,” but that’s nowhere near as challenging as the days you actually see new signs that your body is getting older.

You might be very healthy or use a lot of tricks and supplements, but there’s nothing you can do to stop time. You will get wrinkles on your face, the texture of your skin will change, it will get harder and harder to keep your muscle tone, you stop being able to do things you once could, and whether you look your age or not, people will be able to see the difference between how you look now and how you looked 5 years ago. You can be handsome at any age, but it’s much harder to pull off handsome while trying to trick people into thinking you’re younger than you are, and eventually, if you stay alive, you will get “old.”

We’re not going to try to pretend like there aren’t aspects of aging that suck. But since you are going to get older and never younger, the only and best thing you can do about it is put all your focus and passion into loving and enjoying the age that you and your body are now, whether it’s 25, 30, 50 or 99.

Yesterday when you stepped out of the shower and looked in the mirror, your body looked great. So what’s going on with it today?

“I feel fat today” is probably the worst thing we say to ourselves, missing opportunities for connection or for just living our lives because we don’t think we look as good as we did yesterday and will hold ourselves back until we feel confident again.

Whether it’s an hour after a workout, ten minutes after a meal, the night after a party or the morning after a good night’s sleep, your body responds to its environment in both long-term and very short-term ways, sometimes doing its own damn thing regardless of how careful you were.

The older you get the more unpredictable it can be — there’s no regard for your date tonight, your upcoming vacation or the fact that today’s the day that somebody took your picture. The very same times that you have fun and meet people, you’re body’s getting tired and showing signs. Or, you could be full from a good meal, have gotten bloated from drinking, or just ate too much salt. In any case, the things you enjoy don’t necessarily lead to seeing yourself as “sexy” in the mirror. Are you going to stop living your life to keep yourself looking perfect all the time?

Or maybe you’re just standing in unflattering light, and sometimes you think you look worse today but it’s completely in your head.

It’s a part of being human — our bodies are alive and full of surprises — and when we live, it shows. Besides, we aren’t objective observers of ourselves, usually holding ourselves to a higher standard. We just have to be confident enough to appreciate our bodies, any day and in any way they appear.