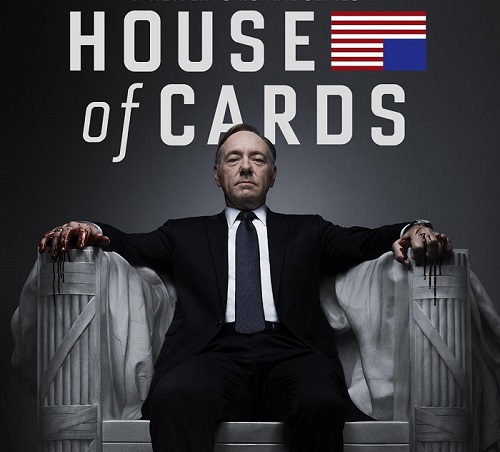 When Netflix hit, House of Cards returned for its third season, many of you have probably binged through all of it. That’s totally understandable, because like the two seasons prior, this season of House of Cards is full of the jaw-dropping performances, Machiavellian maneuvering, and out-of-left-field plot twists we’ve come to expect from the series.

There’s also the WTF sex scenes we’ve come to know and love—think last season’s bisexual three-way with Special Agent Meechum (played by Nathan Darrow). In Season 3, we witness Claire reviving her husband via coitus— or “fucking the hope back into him” as show creator Beau Willimon puts it—and a very intimate moment between Frank and his biographer, Thomas Yates. Willimon spoke to the Huffington Post about President Underwood’s sexuality and that intimate Yates scene on the couch in his study.

“People have asked me straight up, ‘Is Frank Underwood bisexual? Is he gay?’ And I don’t think Frank Underwood really puts much stock in those sorts of labels. As he says in the Sentinel episode [in Season 1], ‘When I’m attracted to someone, I’m attracted to them. Period.’ He’s a man with a large appetite, he’s a man who does not allow himself to be placed in any sort of milieu or with one definition. I think he’s incredibly guarded with who he lets get close to him, whether that’s platonic or whether that’s sexual.”

Willimon goes on to explain: “When [Frank] does, it’s not necessarily a gender or preference, it really has to do with trust. There’s very few people in this world that we’ve created that he can trust. […] We try to approach Frank the way he approaches himself, which is not to sort of pin him down.”

As for the scene between Frank and Yates, well that may or may not be something there.

“It’s an emotional connection. Not necessarily a sexual one, but it could be. It depends on how you look at that moment and I think there’s a lot of grey area there. […] At least for that moment, he can trust Thomas Yates, whether it evaporates quickly or not.”