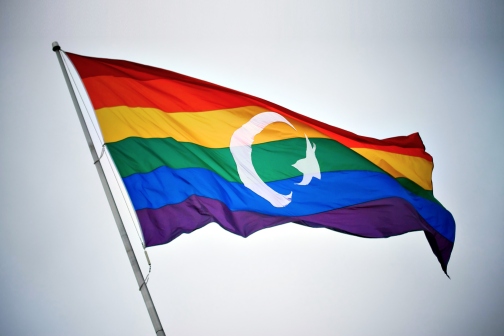 There is a consensus among Islamic scholars that all humans are naturally heterosexual, thus homosexuality is seen by Muslims as a sinful perversion from the norm. Severe punishments, mostly death, are therefore applied to offenders. In Islamic jurisprudence, four male adult witnesses are required to testify against those accused before conviction could be obtained. I don’t know how far this is applied though, but since the 1979 revolution in Iran, it is estimated that over 4200 alleged gays have been executed. This is the same for other Arab nations.

The Prophet Mohammed cursed effeminate men and women who assumed the manner of men, and he said, “Turn them out of your houses.” Bukhari 72-774. In April 2012, an Iranian Islamic cleric, Ayatollah Jawad-Amoli described homosexuals as inferior to dogs and pigs since, in his opinion, these animals do not engage in such dirtiness.

The ignorant disdain the average Muslim feels for homosexuals is aptly captured in Dr. Muzammil Siddiq’s response to the question ‘Why is homosexuality a sin in Islam?’ By the way, Dr. Muzammil was the former President of the Islamic society of North America. Hear him: “Some heretics have tried to attack Islam and its rulings. They have denounced divorce and plural marriage and permitted alcohol. When they rejected divorce, murder took its place. When they rejected plural marriage, men started taking mistresses instead. When they took alcohol, all kinds of shameful and immoral actions became widespread. Gays and lesbians go against the natural disposition (fitra) which Allah has created in mankind and animals, where the male is inclined towards the female and vise versa. The spread of homosexuality has caused mankind diseases… Even if the only result of this disease is AIDS, which attacks the immune system in humans, that would be enough. It also causes the break-up of the family and leads people to give up their works and study because they are preoccupied with these perversions. Since the prohibition has come from his lord, the Muslim should not wait until medicine proves that harm befalls the one who does that which Allah has forbidden. Rather he must believe firmly that Allah only prescribes that which is good for people and modern discoveries should only increase his certainty in the greatness of Allah’s wisdom.”

He continued: “Homosexuality is a moral disorder, a disease and sin. No one is born gay, just like none is born a thief, a liar or murderer. People acquire these habits due to lack of guidance and education. There are many reasons why homosexuality is forbidden in Islam. It is dangerous to the health of individuals and society. It is the main cause of one of the most harmful and fatal diseases. It’s disgraceful. It’s degrading. Islam teaches that men should be men and women with women. It deprives men and women of their manhood and womanhood respectively. It’s the most unnatural way of life and destroys family life.”

Though he didn’t say how this happens, he ended his rant thus: “I don’t know if many people know about this but on the internet, there are some pages about Muslims who are homosexuals. It is one thing to be a Muslim and a homosexual and to try to justify this choice. The first point to make clear is that as Muslims, we are to accept Allah and his prophet as the authority and final word on what is wrong or right.” Then he called on gay Muslims in countries where the death penalty for homosexuality is not enforced to do an honorable act of committing suicide.

The above, no matter how silly, attests to the fierce objection of Islam to homosexuality. But wait till you read this:

WHEN IT’S OKAY TO HAVE GAY SEX IN ISLAM

Notwithstanding the above, facts in history have shown that Islamic leaders justify the indulgence in gay sex or are involved in it themselves.

Quaran 56: 17, 52: 24, 76: 19: “…and immortal boys will circulate among them, when you see them you will count them as scattered pearls (boys).” Objectively speaking, the mere presence of boys doesn’t mean sex, but it is strongly implied by the emphasis on effeminacy, handsomeness and “freshness” of the boys. The female virgins of Alijana (paradise) are also compared to pearls (boys), Quaran 56:23. The above verses suggest that there will be gay sex in the Muslim heaven as Allah’s reward to faithful martyrs.

In 1453, when Mehmud, a Muslim general, conquered Constantinople in a Jihad, he demanded the 14-year-old son of one of the city’s Christian leaders as his sexual concubine. Father and son chose death instead. Subsequently, the Ottoman administration also engaged in homosexuality with boys of conquered populations as alternative payment of tax from parents who could not afford the poll tax on non-Muslims but would rather give their children up for gay sex rather than accept Islam.

Another Islamic cleric, Sheik al Qasab issued a fatwa endorsing homosexuality as a means of widening the anus in order to load it with enough explosives for suicide bombings. Hear him: “Jihad comes first, for it is the pinnacle of Islam. If it can only be achieved through sodomy, then there is no wrong in it.” Most disturbing is the raping of men by ISIS and Boko Haram with the aim of using the video record to blackmail them to join the militant groups.

Still in the quest on finding an answer to the question, “Does God forbid homosexuality?”, I have collated the above for us to read, think on and answer. The next two articles focusing on Islam will be brief, and then we will look at Christianity and Buddhism, before arriving at a conclusion.

36 thoughts on “Homosexuality: The Hypocrisy Of Islam”