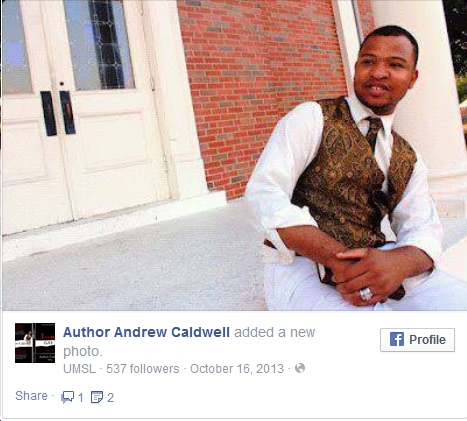 All week, people have been talking about the video of a young man standing at the altar in church, saying that he was delivered from homosexuality. At the recent Church of God In Christ (COGIC) convocation event last week, the COGIC’s 107th, the young man walked to the altar and asked to share his story in front of the congregation. The 21-year-old’s testimony went viral and caused a great deal of controversy, and now, that young man is speaking out about everything. His name is Andrew Caldwell, and he recently posted a statement on his Facebook page sharing some of his back-story (and promoting his books…yes, he’s an author). He let people know what drove him to the altar during that convocation, as well as how he’s dealing with all the attention.

“My name is Andrew Caldwell. I appeared on a video at the recent Church of God In Christ International Convocation in St Louis. On that video I gave a testimony of deliverance from homosexuality. As a child, I was raped by a member of my own family. At that time I did not think of it as abuse. I kind of enjoyed it. I kept it to myself, not realizing how it had changed me. Growing up wasn’t a pleasant experience. I was harassed, heckled, and ridiculed by classmates. Many told me that I would never amount to anything. This gave me the motivation to try to prove them wrong. Being fairly attractive as a young man, it was not difficult for me to get involved with other men. I have dated athletes, ministers, and celebrities. As time passed I got tired of this way of living. I always attended church. But I always found the same things in church that I found in the world. After joining my present church, it came to me that this lifestyle was not right. It seemed that the more I tried to quit on my own, the more intense was the temptation. All last week I fasted and prayed. On this past Saturday at the Convocation, there was an altar call. I came forward and offered my testimony. It was unscripted. Not only do I hope for my own deliverance but for the deliverance of others who may be struggling with their own issues. To my doubting detractors, I pray for you. To my supporters, I am grateful for your support and prayers.”

Caldwell also did an interview with the blog show Church Folk Revolution Radio, and calling it interesting would be an understatement. Here are the points that really stood out (FYI: how you read his comments are exactly how he said them):

HOW HE’S DEALING WITH THE ATTENTION/CONTROVERSY:

“It’s a little bit overwhelming, but also, God, He gets all the glory. If it wasn’t for God’s grace and a chain has been broken, and I’m no longer bound, what would I be? So God is saying, take the chance I gave you. I always wanted to be famous. I always wanted that. In life, I always wanted to be the top person…That video was not be famous. That video was not planned. I did not know I was going to get that mic…When I walked up there, I was walking up there, chains bound. I was walking up there, not knowing that I had more hope to myself. I needed prayer and I got the prayer.”

WHAT HE WAS FEELING BEFORE HE WENT TO THE ALTAR TO SHARE HIS STORY:

“When I first came to my church, my hair was dyed blond and red. I was carrying a purse. I had diamond earrings. I was wearing tights, the skinny jeans–with the boots. Different things that women would wear. I was acting like a first lady. So now, I don’t think about that no more…God can deliver, but you have to want to be delivered. You have to say, ‘God, I don’t want this no more. And then it’s going to take a process…I had to keep coming up there for prayer.

HOW HE FELT ABOUT THE VIDEO GOING VIRAL:

“It was meant. God will put the spotlight on certain people in certain seasons. It was meant for that video to go into homes. You might laugh at it, but that laugh, at the end of the day before you went to bed, He got you on that laugh. You thought about that. I am delivered. I have been receiving thousands of inbox messages on Facebook and emails that say, ‘Hey, I laughed at your video, but I have not told my husband that I was gay. How can come out of it?’

ON BEING ATTRACTED TO WOMEN NOW:

Lol. Oh dear. For those of you who haven’t seen the video yet, check on it below.

37 thoughts on ““To My Doubting Detractors, I Pray For You.” Man Who Says He Was Delivered From Being Gay In Viral Video Speaks Out”